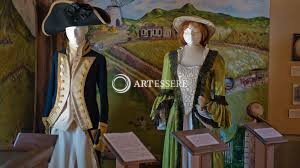 As its names implies, this museum displays artifacts and memorabilia of the life and times of British Naval Admiral, Lord Horatio Nelson, who visited Nevis in the late 18th century.

Nelson’s love affair with Nevis was largely due to Fanny Nisbet, a widow he met at a dinner party on Nevis. The two fell instantly in love, and their nuptials are without a doubt the most famous wedding here to date.

The museum houses what is said to be the largest collection of Nelson relics in the Western Hemisphere, called “Nevis in the time of Nelson”. The late Robert Abrahams, a Philadelphia lawyer who had a home in Nevis, compiled the collection during his life and first displayed at his Nevis home.

Mr. Abrahams donated the artifacts to the Nevis Historical and Conservation Society, a non-governmental body, which he believed was most capable of caring for the collection. The Society began construction of the Horatio Nelson Museum to house the collection in 1990.

On March 11, 1992, the museum opened in honour of Nelson, who is best known for his valiant command of the British fleet during the Battle of Trafalgar. The opening date was the wedding anniversary of Lord Nelson and Fanny Nisbet, and to this day the historical society hosts an anniversary tea each year in their honour.

Efforts to conserve those delicate artifacts have been well rewarded. They have fascinated thousands of visitors to Nevis, including Queen Elizabeth II and other members of the Royal family who have visited the island.