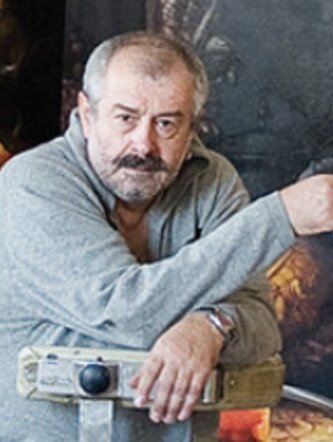 Shimon Okshteyn, born in Chernivtsi, Ukraine, was a graduate of the Mitrofan Grekov Art College in Odessa, Ukraine. He lived and worked in the USA since 1980. He had completed 20 solo and group exhibitions by the time he immigrated to the United States in 1980.

Okshteyn works in a variety of formats, including drawing, sculpture, installations, and mixed media, making his work almost impossible to categorize. He is known for his commentary on themes such as consumerism, sexuality, and cultural memory.

Okshteyn’s work also is featured in the collections of several museums in modern Russia, including the State Russian Museum in St. Petersburg and the Museum of Contemporary Russian Art in Nizhniy Novgorod.

Okshtein's works are in the collections of New York's Whitney Museum of Contemporary American Art and the Brooklyn Museum. Specialists at the Whitney Museum placed the artist's work alongside American classics Jasper Johns, Robert Rauschenberg and Christo in the exhibition "Approaching Objects".

In 1997, he was awarded the Biennale Internationale Dell Arte Contemporanea Prize in Florence, Italy.