Chances are, you’ve heard of Banksy before, even if you aren’t interested in art. One of the most controversial painters and well-paid artists of all time, Banksy has managed to combine demonstrative contempt for the system with unreserved admiration from the public he taunts, the system he mercilessly criticises, and from the police he’s constantly teasing.

Banksy is a pseudonym for the anonymous, politically subversive artist. Who uses the streets of London and New York as a canvas for his graffiti art, in which he addresses issues such as capitalism, war, religion, sexuality, and corporate power.

Banksy's work now focuses more on large-scale murals than traditional graffiti, as he is constantly pursued by authorities who consider him a vandal. He has been nominated for several awards and is highly appreciated by the public in general, as well as by art professionals and collectors, who, as it turned out, would gladly pay  £18 580 000 euros for his works, making him the most highly appreciated English artist in history.

Though, again, the odds are, you’ve already heard of that, less known is Banksy's social experiment, in which he hired a man to sell his paintings in New York's Central Park for $60 each, with public showing very little interest:

"It was not surprising that the man selling black-and-white Banksy graphics in New York found no takers for most of the day. They came from a pop-up stand in Central Park selling cheap tourist souvenirs, among many others, and were outrageously expensive at $60 each." 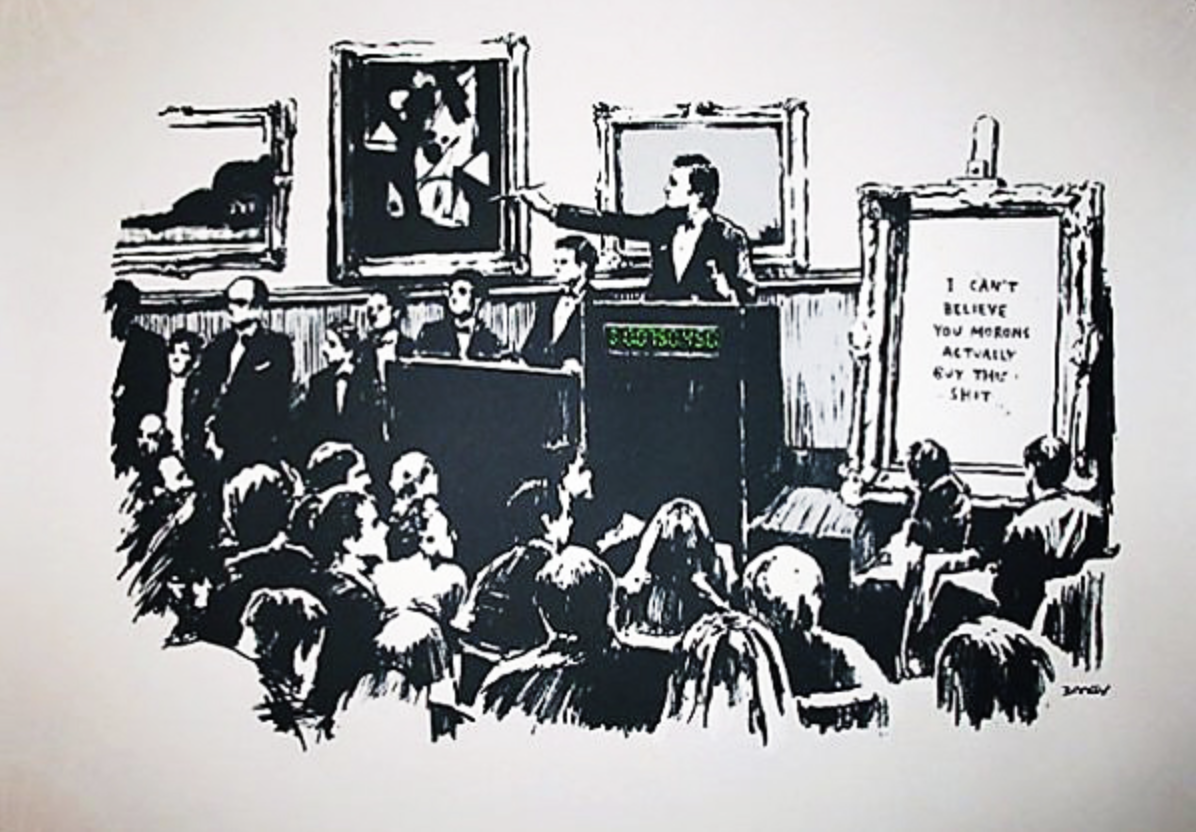 This raises a myriad of questions, the most piquant being: "Why did his other work sell for millions?" and "Exactly how subjective is the price of art?". We attempted to answer the latter question in one of our earlier blogs, only to find that it is a discussion that can be had for years (at best), but the former question is also interesting.

Although we were quite stupefied by the prospect of tackling such a Herculean task, we ultimately concluded that the value of art is in the eye of the beholder, and that value should have something to do with art's ability to evoke feelings, reactions, and rumifications. From the beginning, Banksy's work has been an unequivocal and sometimes cruel satire on society's biggest problems: the futility of consumer society, the endless rat race, animal cruelty, the horrors of war, and many others. 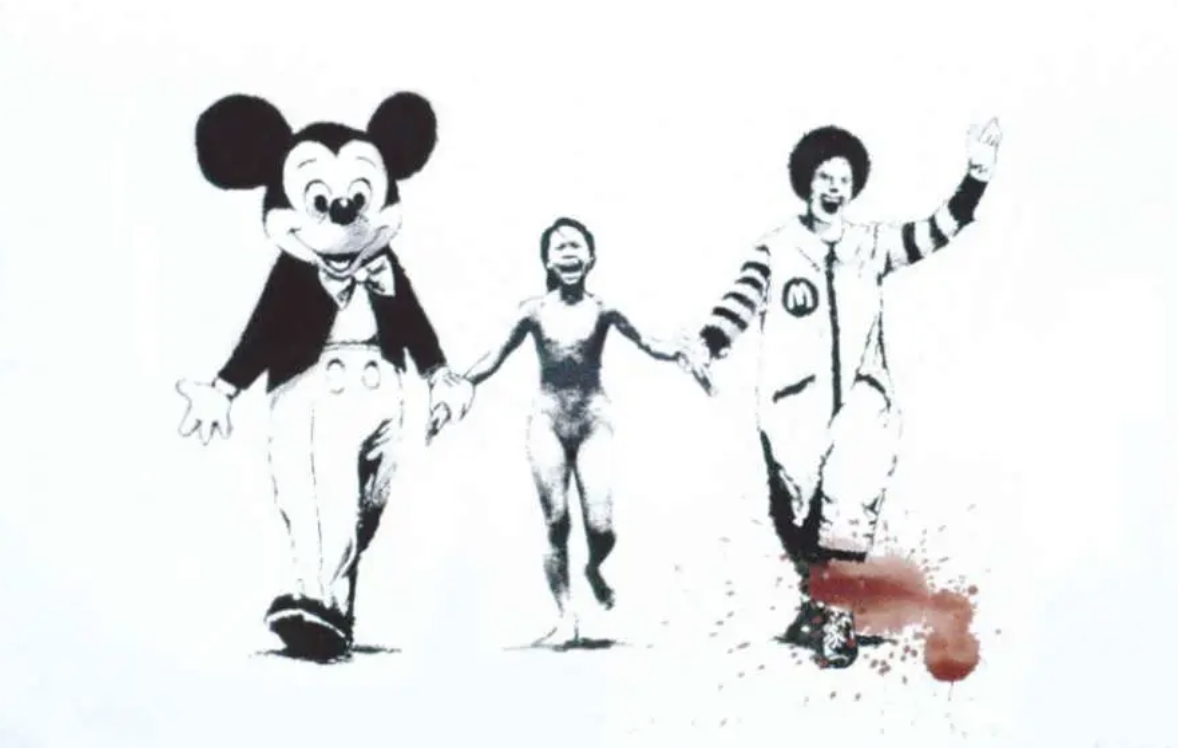 Society has always been ambivalent about the dark side of our success, preferring to focus on the bright side of life such as entertainment and achievement, while other parts of our culture such as societal inequality, animal testing, domestic violence, and countless others have been left out of the picture (until now).

Countless problems that surround us aren't so easily solved, and so we prefer to act complacent/successful and fulfilled and pretend they don't exist. But even if we're very good at forgetting about them (i.e. developing a selective vision when we pass war veterans on the street), there's always a part of us that calls out.

This is the story behind Banksy's images: primal, unquestioningly intrusive, and irresistibly powerful. They appeal to our basic need for fairness, regardless of how much time we've spent rationalising the many injustices in the world. 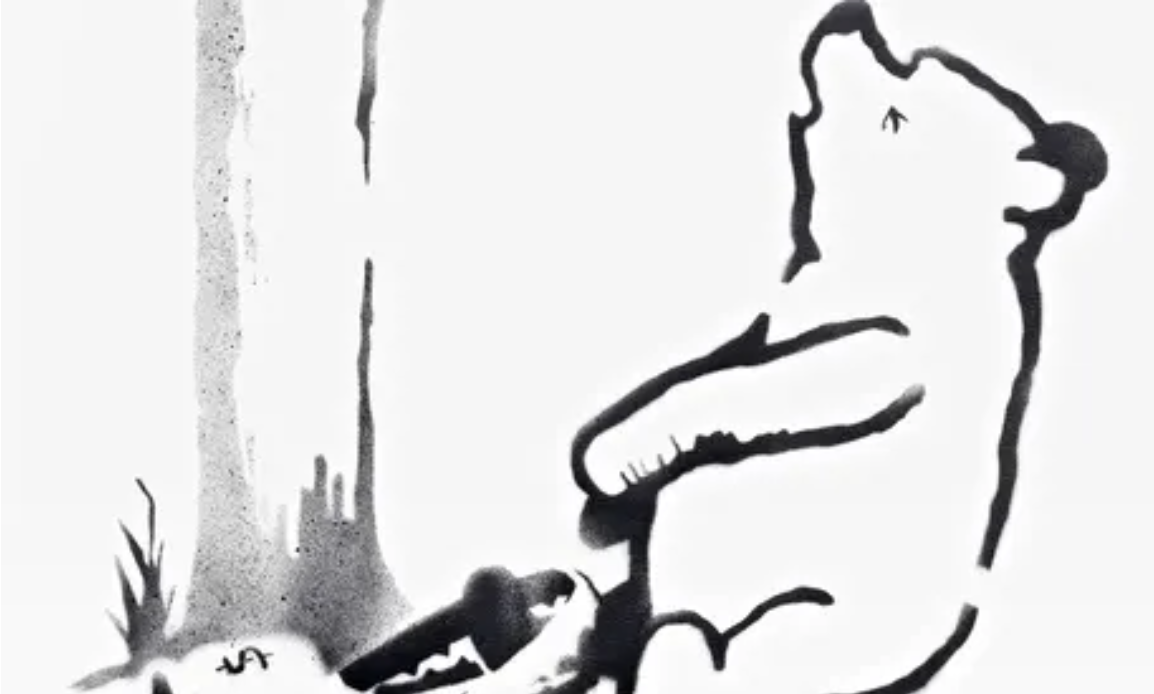 If the value of art is to evoke a strong reaction and provoke deep thought, it’s understandable why Banksy’s work is worth millions. If you've seen one of Banksy's impressive works, you'll probably never forget it, and it’s very likely it has changed how you think. How?

In addition to the feelings Banksy evokes, his legacy is also thought-provoking. While the placement of his images is never random, the messages are all the more timely and relevant. For example, by launching the experiment of selling his works for £60 each, Banksy bypasses your scepticism and makes you wonder what his paintings would actually be worth if people didn't know they were his, and if this whole story is really about Banksy or the hype that comes with being part of it. That also goes for all his other work, which is unequivocally thought-provoking.

To summarise, part of Banksy's popularity certainly has to do with the primal reactions we have to our repressed guilt for being unwilling to do anything about the many ills of the world, and a lion’s share has to do with the brand, but a big part of what makes people choose Banksy over others is the intellectual depth of the questions he asks. Like a surgeon's scalpel, they're painful and disconcerting, but they may be the only thing that can save us.

Stay in touch with Artessere for more fascinating and thought-provoking facts from the art world!