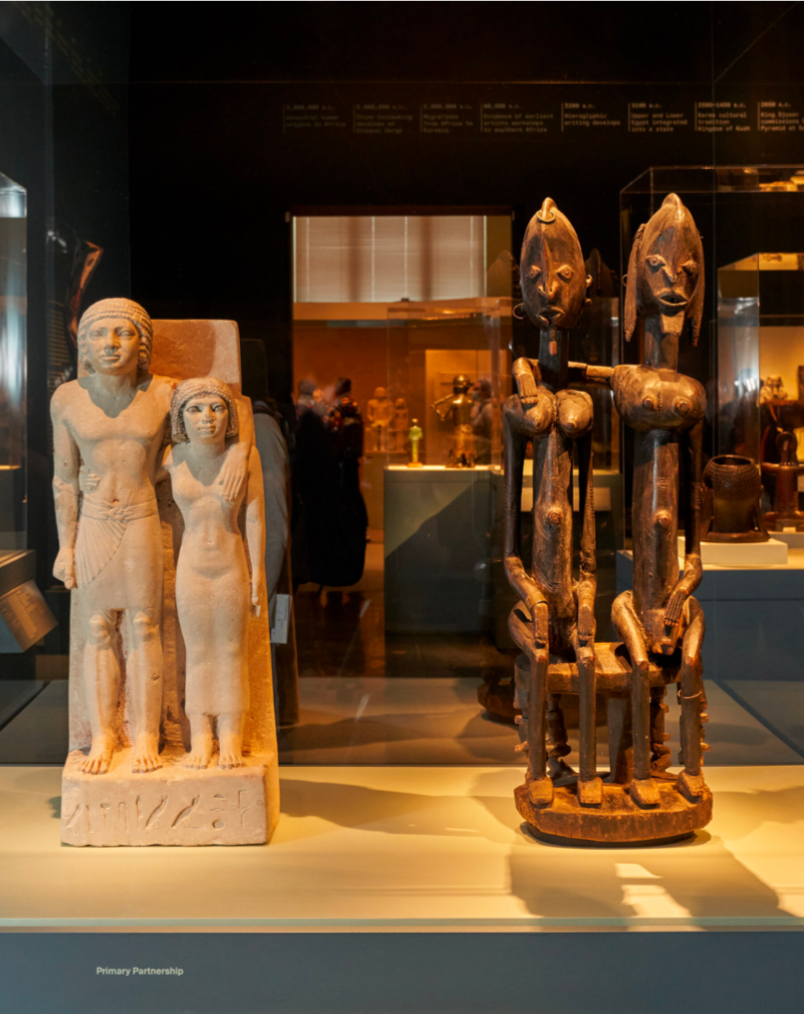 Partnerships: Spanning eras and cultures, a pairing of artworks from “The African Origin of Civilization” includes “The King’s Acquaintances Memi and Sabu” from Egypt, ca. 2575–2465 B.C. and “Seated Couple” from Mali, 18th or early 19th century. Credit: Seth Caplan for The New York Times

In 2020, and continued through 2021, a call reached museums in all corners of the world. The call was for decolonization; from fairer pay structures and hiring to curation and objects held within galleries, the nature of the museum was called into question in the wake of the Black Lives Matter uprisings.

As the pandemic has continued and museums have fought to remain relevant, this call seems to have piqued the interest of many within the system. Some museums, however, have chosen to approach the topic differently. The Metropolitan Museum of Art in New York City is currently under fire for their recent exhibition The African Origin of Civilization.

In order to fully explain why many see this exhibition as problematic, it is important to point out that the vast majority of African objects in museums such as the British Museum in London or the Musée du Quai Branly in Paris are under scrutiny at this moment. How these pieces ended up in museums around the globe, the political tensions they still create by museums refusing to return them, and the lack of cultural context they have in a Western museum are all frequently thought of as an example of neo-colonialism.

The African Origin of Civilization may have had good intentions, but paints the Metropolitan Museum of Art as a savior of culture. There are a limited number of examples in the exhibition in which they recognize that the objects on display were taken forcefully, but this requires delving deeper than the information on the wall. In particular, Britain’s bloody 19th Century military occupation of Benin led to thousands of artifacts being placed in museums around the world. Benin has since called for restitution unsuccessfully, seeking to regain the Benin Bronzes from the British Museum among other objects, such as those on display in the Met.

The first object one sees when walking into the gallery is a 16th century statue of a horn player which once stood on an ancestral altar in the royal palace of the Kingdom of Benin (modern day Nigeria). In 1897, Britain violently deposed the Oba (king) of Benin in order to continue to profit from palm oil and rubber trade. This occupation, which killed countless civilians, recovered its expenses by looting centuries worth of cast brass and carved ivory artworks from the palace. The horn player’s label simply states: “At the time of the 1897 British invasion of Benin City, artifacts relating to some 30 palace altars were dispersed internationally.”

Stepping away from the controversy, the exhibition offers a side-by-side look at artworks from Egypt and Sub-Saharan Africa. It is relatively small, offering an opportunity to continue to see these works as the Michael C. Rockefeller Wing and the Arts of Africa galleries are closed for renovations. 21 of nearly four thousand artifacts from sub-Saharan Africa are on display. Carvings of men, women, and regal animals, as well as masks and alabaster headrests from Egypt and sub-Saharan Africa seek to trace a history in Africa, claiming Malians and Ethiopians were inspired by works by Egyptians.

Well-intentioned as it may be to seek to share and make African art familiar to new audiences, this exhibition also points out the structural ways in which such collections must be completely re-organized, placed in better historical context, and rethought in terms of continuing the traditional view of Egyptian art being “high art” and sub-Saharan African art being “primitive”. One can hope that during this restructuring of the closed galleries, this will be undertaken and not overlooked.

The exhibition is on view from December 14, 2021 until the completion of renovations. It is free to view with the cost of admission.