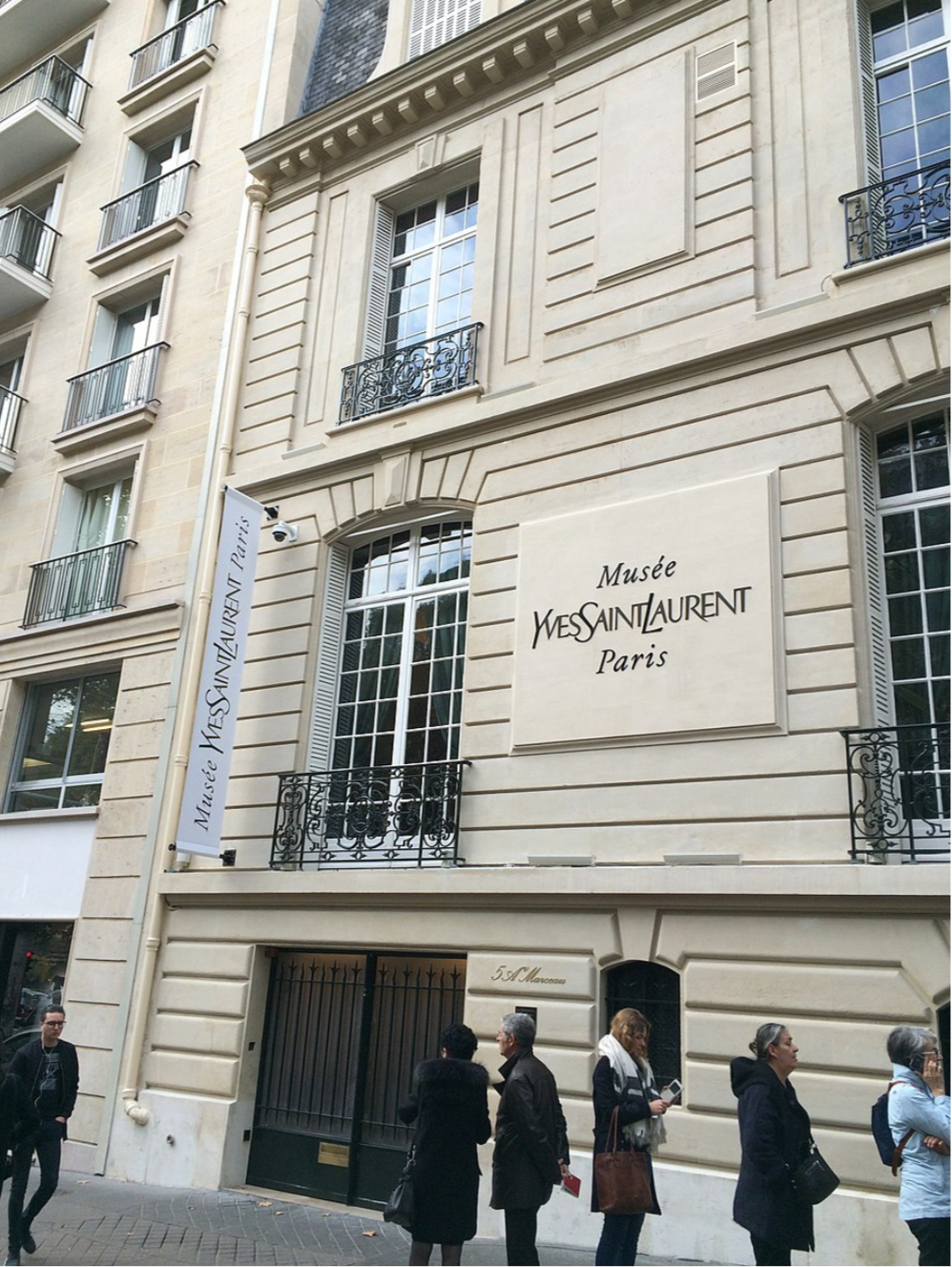 Six Parisian museums are taking on the sixtieth anniversary of Yves Saint Laurent’s first fashion show parade. Opening on January 29, this exhibition, called “Yves Saint Aux Musées”, is the largest survey of any fashion designer, featuring a side-by-side view of Saint Laurent’s pieces and the artworks that inspired them. Each of the museums participating (the Centre Pompidou, the Musée d’Art Moderne de Paris, the Musée du Louvre, the Musée d’Orsay, the Musée National Picasso–Paris, and the Musée Yves Saint Laurent Paris) are focusing on different themes, from color to literature to French craftsmanship.

Working closely with the curatorial teams at each museum, the co-curator of the exhibition Mouna Mekouar sought to create a harmony between the respective museum’s permanent collections and the pieces of clothes inspired by the works. Throughout his career, Yves Saint Laurent notably reinvented visual arts heritage in his fabric works. This exhibition seeks to draw attention not only to the genius of Yves Saint Laurent’s creations, but to the works that inspired them.

At the Musée du Louvre, the designer’s love of gold is highlighted. Throughout the museum, jackets and other garments are featured which are embroidered with crystals and gold. The Apollo gallery is central to this exhibition, underlining decorative arts and pageantry that can be found both in the Louvre’s collection and the work of the couturier. This underlines Saint Laurent’s love for the lavish, rather than looking at the Renaissance masters who also influenced his clothing.

The Musée d’art Moderne de Paris shows how Yves Saint Laurent was aware and sensitive to correspondences among the arts. He played with the same things the artists who influenced him did: rhythm and color, light and material, and images and dialogue. Color becomes the central focus of this exhibition, partnering jewel toned dresses with works by Raoul Dufy. Due to the fabric’s light sensitivity, the permanent collection had to be reshuffled in order to allow the full interplay the exhibition had planned, moving pieces such as those by Bonnard to a dimmer room in order for the clothing inspired by them to be shown in tandem.

The Centre Pompidou, home to the Musée national d’art moderne (National Museum of Modern Art), is focusing on Yves Saint Laurent as an artist who was deeply rooted in his time and simultaneously witness to the evolution of artistic creation that shook the 20th Century. The French modernist artists that Saint Laurent experienced in his youth, including Matisse, Braque, Bonnard and Léger, are featured in the gallery’s collections as well as in the choice of garments on display. Piet Mondrian is of course iconic and central in Saint Laurent’s works, and this is underlined in this exhibition; his evening dresses take influence from Mondrian as well as Cubist works. 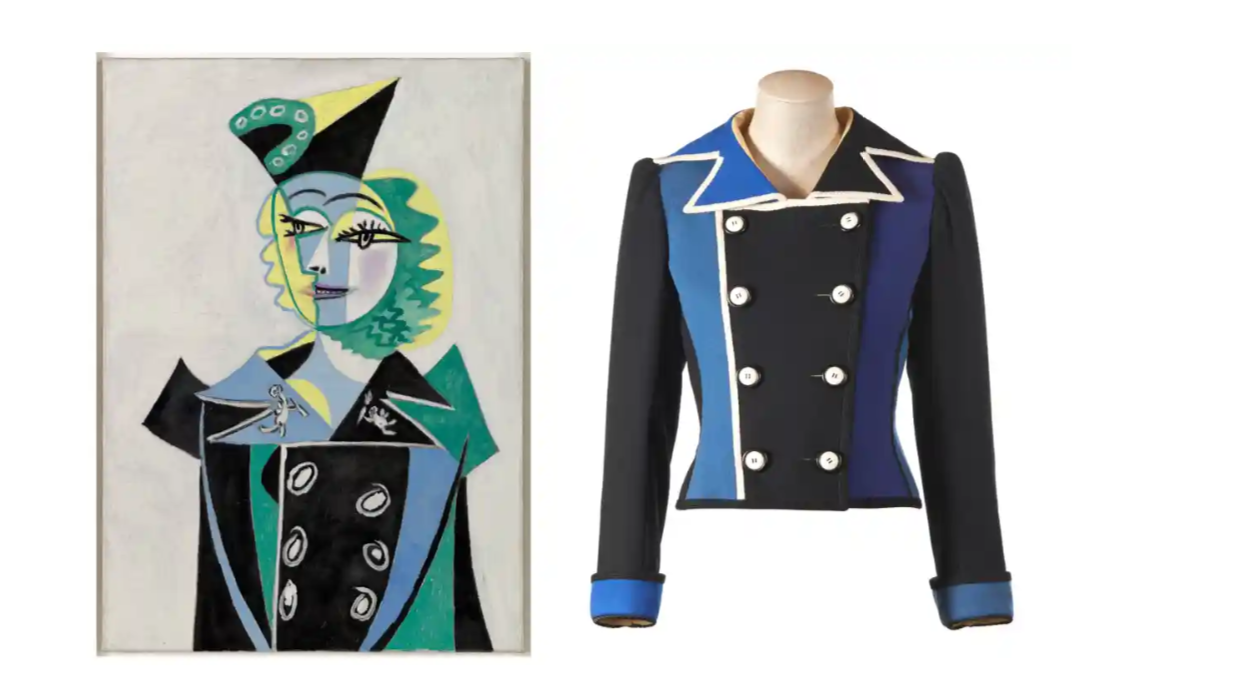 Closely related to this and focused on only one artist, the Musée National Picasso Paris is focusing, of course, on the influence Pablo Picasso had on Yves Saint Laurent. The usage of quotes is important to this particular exhibition, and the play between Picasso’s paintings and the designs they influenced.

Meanwhile, the Musée d’Orsay has focused on Saint Laurent’s admiration for the writing of Marcel Proust. Proust is even believed to be one of the inspirations for Le Smoking, one of the designer’s most iconic and groundbreaking designs; a tuxedo suit for women. By playing with masculine and feminie codes in clothing, Saint Laurent changed French fashion forever. Also in this exhibition, sketches for famous dresses (and the dresses themselves) for the Baron de Rothschild’s 1971 Proust Ball at the Château de Ferrières are featured on various levels of the museum.

The epicenter of the exhibition is, of course, the Musée Yves Saint Laurent. Here, the designer’s process of making clothes, from selecting buttons and prints to shaping shoes and hats, is cataloged. The atelier is filled with linen works, on which you can see a Braques-inspired design. The only finished design on display is Homage to Vincent Van Gogh (from Spring Summer 1988), which features a glittering version of Van Gogh’s well-known “Sunflowers” series.

Visitors are invited to create their own roadmap of the exhibition, choosing how and when to visit each individual museum. That stated, the presentation at the Musée Yves Saint Laurent serves as both a beginning or an ending of this multipart journey. Comparing the event to various islands on an archipelago, Mekouar said, “This is a treasure hunt for those who enjoy following hints and clues.”

To find out more information about each exhibition, visit the respective webpages of the galleries in question.

Entry costs vary by museum (from free to €17), and while all exhibitions will run until May 15, some will be on for longer than others.